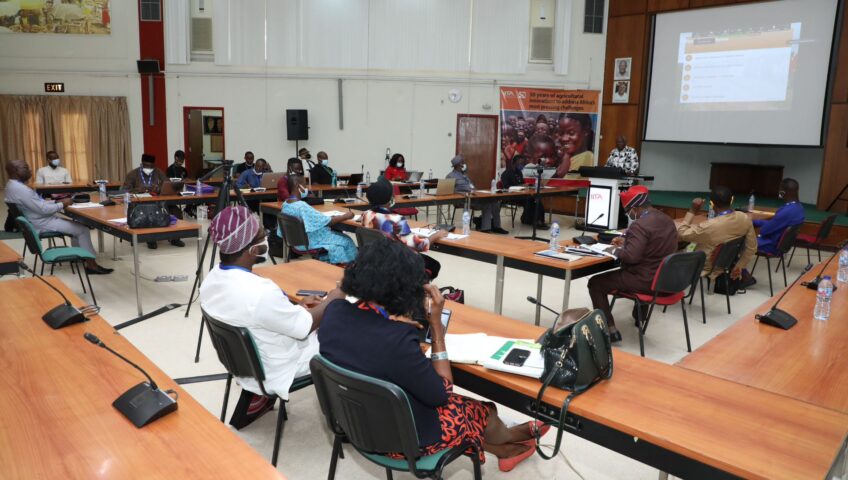 Agricultural stakeholders and policymakers in Nigeria are calling for the adoption of the Six Steps to Cassava Weed Management & Best Planting Practices toolkit that was developed by the International Institute of Tropical Agriculture (IITA); and the use of improved cassava varieties, to increase cassava productivity in the country.

The stakeholders reached the agreement at a one-day meeting tagged, “Addressing the yield gap in cassava during COVID-19 era: The role of Cassava Seed System and the Six Steps to Weed Management & Best Planting Practices of AKILIMO”, held on Tuesday at the Conference Centre of IITA in Ibadan.

At the meeting, which had officials of the Federal Ministry of Agriculture and Rural Development (FMARD), state commissioners of agriculture, permanent secretaries and program managers of Agricultural Development Programs (ADPs) in attendance; IITA researchers presented field reports on how farmers applying the Six Steps to Cassava Weed Management & Best Planting Practices toolkit; and using improved varieties were getting impressive yields of cassava of more than 20 tons per ha as opposed to the national average of 9 tons per ha.

In his welcome remarks, IITA Deputy Director General (Partnerships and Delivery), Dr. Kenton Dashiell, advised government authorities in the country to give priority to technologies that enhance the productivity of cassava in order to reduce the country’s food and raw materials import bill.

While delivering the keynote address, the Director, Federal Department of Agriculture, FMARD, Mrs Karima Babangida, said that Nigeria would attain its true potential in cassava by adopting the “Six Steps…” toolkit and other agronomic practices with the use of cassava stems of improved varieties.

Mrs Babangida, who was represented by Raji Hakeem, FMARD Cassava Desk Officer, called for adequate policies and technologies that could raise the productivity of cassava to 40 metric tons per hectare to compete with other cassava exporting countries like Thailand.

Her words: “It is my firm belief that, the challenges posed to cassava production could be surmounted through the adoption of appropriate policy measures, deployment of efficient technologies, improved agronomic practices and cropping systems that would take maximum advantage of new and improved varieties, which could be easily adopted by farmers”.

The Director for Development & Delivery of IITA, Dr. Alfred Dixon, in his own speech, noted that poor weed management and agronomy, and the low use of improved varieties, had been the bane of cassava productivity in Nigeria.

READ ALSO: Dr Dixon proffers tips on how to achieve sustainability and scaling of agricultural innovations

He advised governments to “step back from policies that disrupt the seed system”, and help farmers adopt the Six Steps to Cassava Weed Management and Best Planting Practices toolkit. He stressed that the impact of poor weed management and agronomy stretched beyond agriculture into other sectors of life including health and education.

His words: “One of the realities of poor weed management and agronomy is that women spend about 500 hours per year to keep one hectare of cassava farm weed-free. This compromises the health of women. And in some cases, girls are withdrawn from school to support weeding.”

Commissioners for Agriculture present also vowed to push the adoption of the Six Steps toolkit and improved varieties in their states. Hon. Julius Egbedi, the Commissioner for Agriculture and Natural Resources in Delta State; and Prince Adetoyi Olabode, the Commissioner for Agriculture and Food Security in Ekiti State, speaking on the sidelines of the meeting, both noted that use of local varieties and impaired agronomic practices were the two major factors militating against cassava in their states. They both promised that they would set machinery in motion to see how their state governments could train extension agents and farmers on the Six Steps toolkit as well as the use of cassava stems of improved varieties, to boost the ongoing agricultural transformation programs in their states.

Prof. Ekeleme spoke on the research and trials that produced the Six Steps toolkit, while Prof. Sanni dwelled on how the BASICS-II project was working towards ensuring that farmers have access to quality cassava stems of improved varieties. Dr. Kumar’s presentation was on IITA’s collaboration with the National Seed Council (NASC) in ensuring the certification of disease-free cassava stems through the Cassava Seed Tracker. Dr. Kreye reported on how AKILIMO, an all-in-one agronomic recommendation tool developed by ACAI would deliver tailored agronomy recommendations to cassava growers at their various locations in the country, while Godwin Atser’s presentation was on the digital approach IITA was using in delivering the Six Steps toolkit and cassava seed system messages to farmers across Africa.