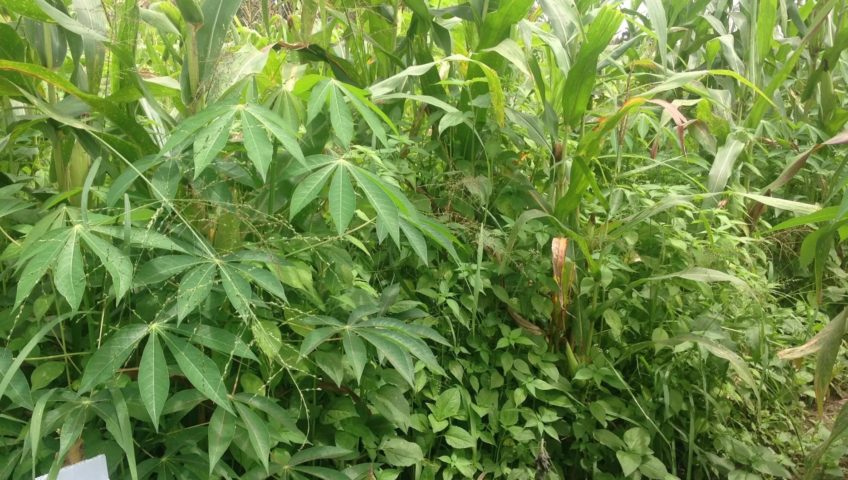 April 29, 2020 No Comments By Cassava Matters Our News Agronomy, Weeds

Researchers working at the International Institute of Tropical Agriculture (IITA) and national partners have identified eight major weeds undermining the yield of cassava and hurting the incomes of farmers in Nigeria.

These findings are useful for smallholder farmers and companies seeking solutions to weed menace and targeting specific agroecological zones in the country.

Conclusions from the study followed field evaluation of weeds and management practices conducted in 200 cassava farms in three agroecologies in Nigeria. Four states were involved in the agroecologies, which are noted for cassava cultivation and where the bulk of Nigeria’s 56 million tons of cassava come from. The states are Abia, Benue, Oyo and Ogun.

In the Humid Forest zone (Abia and other areas in the South East), the study found Ageratum conyzoides, A. africana, Cyperus rotundus, C. odorata, and P. maximum as the five most important weeds.

For the Derived Savanna zone (Oyo, Ogun and other areas in South West), Tridax procumbens, I. cylindrica, C. odorata, Cyperus diffusa, and E. heterophylla were identified by farmers and field evaluation as the five most important weeds. In the SGS zone Southern Guinea Savanna (Benue, Northern part of Oyo and areas in the North Central), the most five important weeds were T. procumbens, E. heterophylla, I. cylindrica, R. cochinchinensis, and C. benghalensis.

In the Humid forest, hoe-weeding (51.2%) and slashing (43.0%) with machetes were the predominant methods of control. Herbicide use was high in the Southern Guinea Savanna and medium to high in the Derived Savanna (26.3-42.2%).

The study concludes that there was the need for education to increase farmers’ knowledge of the problematic of weeds and to improve both their choice of appropriate herbicides and their safe use is critical to effective and efficient weed management in cassava.

This publication came out from the work down by the IITA-managed Cassava Weed Management Project (CWMP), which is currently running in the framework of the African Cassava Agronomy Initiative (ACAI).