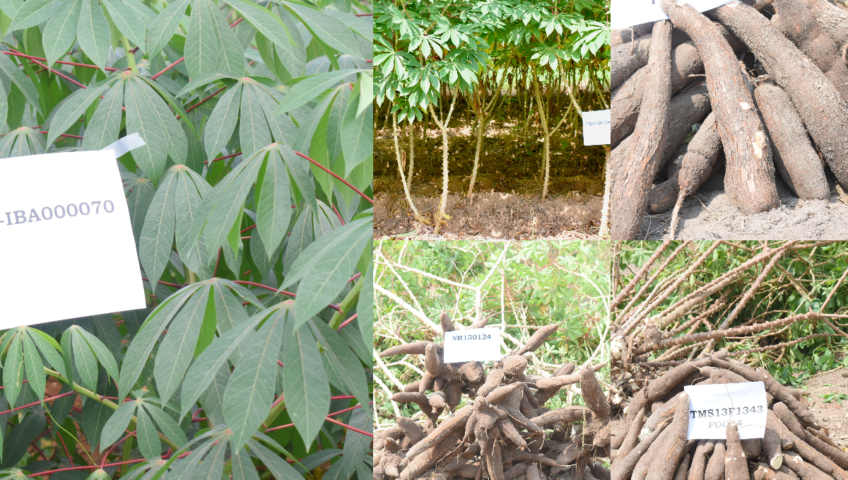 Next generation cassava varieties endorsed for release in Nigeria

Five new cassava varieties developed with support from NextGen Cassava have been approved for release in Nigeria. These next generation varieties deliver promising options for smallholder farmers in resisting cassava diseases and marketing their crops to consumers.

Named Game-Changer, Hope, Obasanjo-2, Baba-70 and Poundable, the five next generation varieties feature high yields and robust disease resistance important for farmers and characteristics sought by consumers. Poundable is the first fresh market variety released in Nigeria. Hope and Baba-70 have excellent gari and fufu quality to address the processed food market. Game-Changer and Obasanjo-2 have high and stable starch content, which is desired by industrial processors for flour, starch and ethanol.

“The foundation of a solid crop value chain is based on best-bet varieties,” said Alhaji Muhammad Sabo Nanono, Nigeria’s Minister of Agriculture and Rural Development. “As a country, we are excited that the new NextGen cassava varieties address the needs of the cassava industry and we look forward to providing millions of Nigerian cassava growers access to these varieties.”
The releases by the National Root Crops Research Institute (NRCRI) in collaboration with the International Institute of Tropical Agriculture (IITA) are the first varieties released using the modernized breeding technologies supported by NextGen Cassava, a project based in Cornell University’s Department of Global Development and implemented by IITA and NRCRI, along with the national programs of Uganda and Tanzania. Launched in 2012, the project utilizes new breeding tools to enhance the speed and efficiency of cassava breeding to empower smallholder growers across Africa. Innovations in the use of genomic selection, the deployment of digital tools for all data collection, and a commitment to robust social science pushed the project to develop the five new varieties tailored to specific needs and market niches in Nigeria, the world’s largest producer of cassava.

“Cassava is the foundation of food security and agricultural development in Nigeria — the country’s health is inextricably tied to the health of its cassava,” said plant breeder Chiedozie Egesi, the NextGen Cassava project director. “These five new varieties represent not only a culmination of years of collaborative work among our partners, but also new opportunities for cassava growers and processors in Nigeria.”

The varieties have been through years of rigorous testing and evaluation with farmers and processors. The breeding team prioritized input from farmers —particularly women, who play a critical role in the cassava value chain — to drive breeding decisions and produce varieties for release.

“Cassava farmers and processors in Nigeria have long faced hurdles, whether from diseases like cassava mosaic disease or cassava crops that do not have the desired color or texture necessary for processing,” said Ismail Rabbi, a molecular geneticist and plant breeder at IITA and a member of the NextGen project. “These new varieties will serve growers whether they are growing cassava for food consumption and/or for processing.”

More than 500 million people in Africa eat cassava daily. Unlike cereal crops such as wheat and maize, cassava is less vulnerable to the deleterious effects of climate change and is expected to play an important role in ensuring food security in Africa in the decades ahead. Fresh cassava plays a vital role in meeting consumers’ nutritional requirements, and its derived products are crucial as industrial raw material.

“Through our collaboration with NextGen Cassava, IITA is pleased to be able to bring these next generation varieties to the people of Nigeria. Improved cassava varieties enrich everyone in the cassava value chain and thus will have a great effect on livelihoods,” said Peter Kulakow, cassava breeder and NextGen Cassava Team Leader at IITA.

The new varieties are expected to be available to farmers and processors in Nigeria soon through the newly formed early generation cassava seed companies IITA GoSeed and Umudike Seeds, which have pro-actively multiplied stems of the new varieties in anticipation of the official release. These companies will be the channels for early generation seed projection, marketing, and distribution of certified planting materials of the five NextGen Cassava varieties throughout Nigeria.

NextGen Cassava currently has improved varieties in the release pipeline in Uganda and Tanzania. “We are hopeful that this release in Nigeria will serve as a guide for future releases in other regions of Africa,” said Egesi.