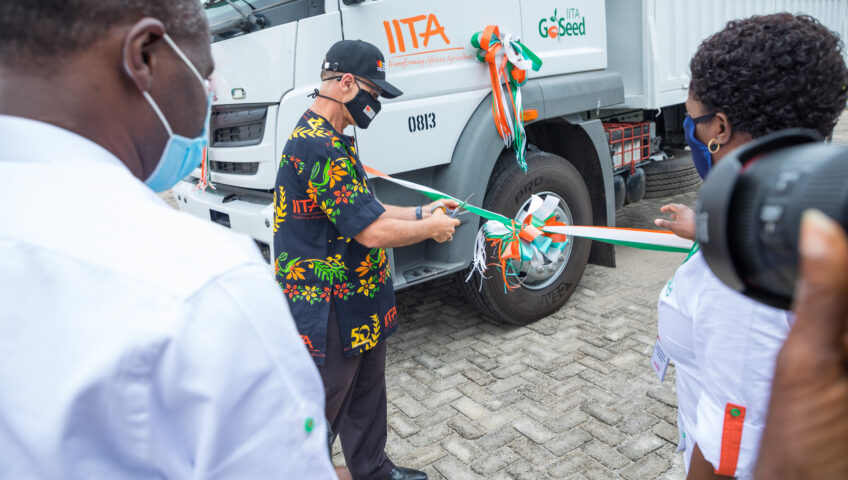 September 2, 2020 No Comments By Cassava Matters BASICS II, Cassava in the News, Our News BASICS II

The International Institute of Tropical Agriculture (IITA) has procured two new trucks for the pioneer Early Generation Seed companies (IITA GoSeed and Umudike Seeds) to enhance the transportation of improved planting materials to different locations in the country.

The 18-ton trucks were purchased  with funds from the Building an Economically Sustainable, Integrated Cassava Seed System (BASICS) project, which started its second phase, BASICS-II, three months ago.

According to Dr. Mercy Diebiru-Ojo, the Vegetative Seed Production Expert at IITA , one of the trucks belongs to IITA GoSeed, and the other belongs to Umudike Seeds of the National Root Crops Research Institute (NRCRI), Umudike, Abia State. Both firms are partners leading the second component of the BASICS-II project for the development of Early Generation Seeds Enterprises.

Dr. Diebiru-Ojo noted that despite BASICS being a cassava project, the trucks will be available to service distribution of planting materials and seeds of all the crops in IITA.

IITA Deputy Director-General, Partnerships for Delivery, Dr. Kenton Dashiell, while speaking at the commissioning of the trucks on 7 August 2020, commended the decision to give access to other crops, describing it as a sign of the team spirit and synergy in the BASICS-II project.

“I want to highlight the great team spirit and teamwork of BASICS and now BASICS-II,” he said.

“They are showing the real spirit that we are here to transform African agriculture and that we are here to support the whole of IITA. They could have easily said this vehicle is for cassava and nothing else since it was bought from a cassava project…I did not make any appeal. I don’t think anyone else did. But they have already pledged that it is for the benefit of all IITA crops. So, big thank you to BASICS-I and BASICS-II teams,” Dr Dashiell added.

Also speaking at the ceremony, IITA Director General, Dr. Nteranya Sanginga lauded IITA GoSeed for doing a great job, undeterred by the COVID-19 pandemic. According to him, the feat the firm achieved by observing safety protocols and continuing to serve farmers despite the pandemic, contributed to the reasons donors retained faith in IITA.

Dr Sanginga however, urged all the units under the Business Incubation Platform (BIP) to show the cost:benefit ratios of their operations and actualize the aim of commercialization for which they were set up.

The Project Manager of BASICS-II, Prof. Lateef Sanni, had earlier assured that BASICS-II was already ensuring the continuity of BASICS-I without hitches.

According to him, “We are scaling to other states in Nigeria. Oyo and Ogun have joined, courtesy of GIZ. We have just fixed a meeting with Ekiti. The scaling is working, not just in cassava. Reports from Kenya and the rest of East Africa is also very positive.”

IITA Program Manager for Roots, Tubers & Banana, Richard Ofei, explained that the need to acquire the trucks became critical owing to the losses being accrued due to the inability to move large quantities of planting materials.