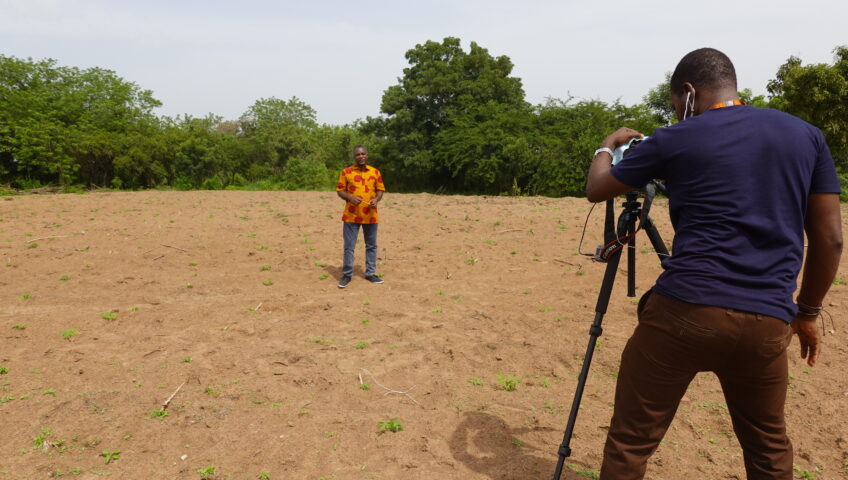 The African Cassava Agronomy Initiative (ACAI) of the International Institute of Tropical Agriculture (IITA) has commenced the dissemination of the Six Steps to Cassava Weed Management and Best Planting Practices toolkit on television.

The TV show, known as Cassava Matters, is broadcast on the television channels of the Broadcasting Corporation of Oyo State (BCOS); and available on local TV on Channel 28 UHF;  cable TV ( GOtv), channel 105;  and Startimes, channel 113. The show airs for 15 minutes every Thursday by 5.30pm.

Speaking on the essence of adding television to the number of dissemination channels for the toolkit; Godwin Atser, IITA Digital Extension and Advisory Services Specialist, explained that the TV show would complement the on-going radio programs by providing viewers with visuals.

“The feedback we are getting shows that the radio programs have been very impactful,” he said. “But we figured that television will allow viewers, especially the farmers we are addressing, to see the things being discussed…Visuals are powerful. And we chose BCOS TV because of the local appeal the television offers in Oyo State. Remember that most of the cassava farmers we are dealing with are local smallholder farmers,” he explained.

According to Godwin, topics being treated on the show include integrated weed management systems, planting, herbicides application, use of improved cassava varieties, etc.

“Even though Cassava Matters will dwell majorly on the “Six Steps…”, issues around the cultivation, processing and business of cassava will be accommodated on the show. So, apart from farmers, agrodealers, extension agents, cassava processors, policy makers, and other stakeholders in the agricultural sector will find the program very informative and educative”, he said.

“Viewers can also catch up on missed episodes on the Cassava Matters Youtube channel and send feedback via emails, phone numbers and our social media handles,” he added.

The Six Steps to Cassava Weed Management and Best Planting Practices toolkit, popularly called “Six Steps…” is a complete package that addresses all aspects of good agricultural practices in cassava production. Nigerian farmers using the “Six Steps…” get more than 20 tons per hectare of cassava roots, which is above the current national average of 9 tons per hectare. The toolkit prescribes best bet practices in site selection, weed identification, preemergence herbicides application, tillage operations, use of improved planting materials, plant spacing, and  post-emergent weed management. The “Six Steps…” has been integrated into AKILIMO, a comprehensive digital advisory service for cassava.