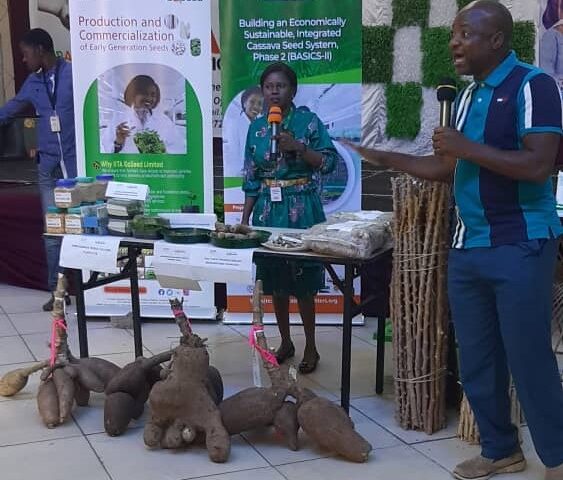 The training was held during the Oyo State Women Entrepreneurship Summit (OWES) on 18 March 2021. The three-day summit with the theme: “Women Rise Up” was convened by Princess Aderonke Rahmat Adedoja on the platform of ARA Foundation.

During her presentation, Dr. Diebiru-Ojo, introduced the newly released improved cassava varieties to the audience, stressing that quality seeds were crucial for food security. The new cassava varieties include: TME419. Dixon, Fine Face, Farmers Pride, Ayaya and Sunshine.  She explained the various technologies employed for improved seed production in cassava, yam, and maize. Some of the technologies include Semi Autotropic Hydroponics technology and Tissue Culture technology.

Commending the women for turning out in large numbers, Dr. Diebiru-Ojo encouraged them to remain strong, courageous, and actively participate in the agribusiness sector.

Godwin noted that clean and quality seeds are the bedrock of a successful and profitable agribusiness venture. He challenged the women to arise and take advantage of the seed sector.

Prof. Sanni, who also spoke at the event, disclosed that IITA was willing to partner with Oyo state women farmers to promote disease-free and improved cassava varieties.