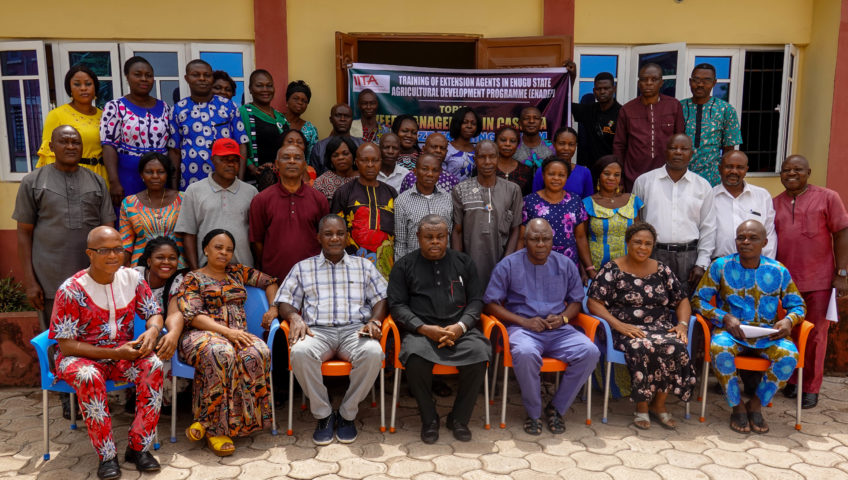 Following the meeting with commissioners of agriculture last year, the Enugu state government has demonstrated its commitment to investing in weed control by organizing the first ever training for extension workers on weed management in cassava and maize farming systems in the state.   The International Institute of Tropical Agriculture (IITA) through the African Cassava Agronomy Initiative (ACAI) was invited to facilitate the training.

At least 40 extension workers drawn from different local governments in the state took part in the two-day theory and practical training sessions held at the Enugu State Cooperative College, Enugu.

The aim of the training was to empower extension workers with the tools to educate farmers on how to grow and double cassava/maize yield in their communities.

Speaking at the opening ceremony of the training on Friday, March 13, the Program Manager of the state Agricultural Development Program, Dr. Matthias Onu, who represented the Commissioner for Agriculture and Natural Resources in the State, expressed gratitude to IITA for facilitating the training.

While welcoming the IITA team which was led by Godwin Atser, Digital Extension and Advisory Services Specialist; Dr. Onu said the training was important because the state had relatively few extension workers, a number not sufficient enough to serve the state’s farming population.

He then expressed hope that the training and digital extension tools participants would be exposed to would greatly increase the productivity of cassava and maize.

His words: “I am glad that this training is coming now because it will assist these few extension workers to reach more farmers more effectively using the digital tools you are going to unveil here. To my fellow extension workers, this is one of the best gifts you have received in recent times. The training has been packaged having in mind that you are very few in number. With your number you can’t do much, but after what they’ll expose to you today, you stand a chance of helping to double yield and productivity in cassava, maize and even rice which Enugu is also known for.”

Onu, as well as some of the participants who spoke, expressed hope that some of the digital tools could be adapted for weed control in other crops like rice.

Responding, Atser hailed the state government for its commitment to agricultural development and organizing a training that will help improve cassava and maize productivity in the state.

According to him, “Agriculture is one of the ways to engender development because it creates jobs, it creates peace and it reduces crimes. It is a major solution to the challenges we have as a country.”

He said the aim of the training, which is the product of a five-year research by IITA’s Cassava Weed Management Project and ACAI, was to “eliminate the pain and drudgery associated with farming, encourage young people to embrace agriculture, help farmers make more money and live well and be able to do other things with the time and resources they are able to save”.

Atser and Prof. John Oladeji, a gender expert with the Department of Agricultural Extension & Rural Development, University of Ibadan facilitated the training.  Apart from Onu, officials of the state Ministry of Agriculture and Natural Resources, including the ministry’s Director of Agricultural services, Asogwa Clement, were in attendance.

“I am glad that this training is coming now because it will assist these few extension workers to reach more farmers more effectively using the digital tools you are going to unveil here.