Cassava MattersNewsOur NewsCBN to collaborate with IITA, NRCRI, on cassava, as ACAI steps up dissemination activities 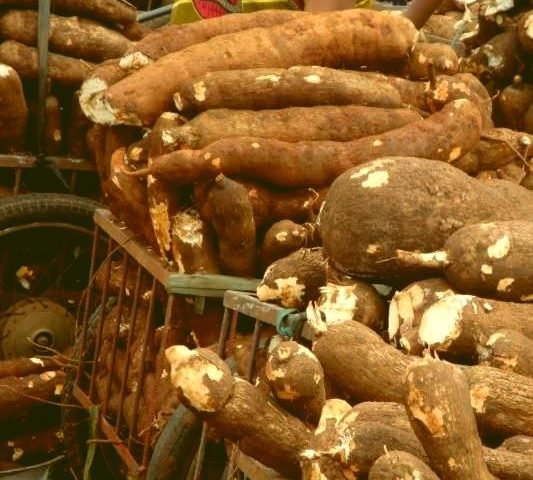 November 22, 2019 No Comments By Cassava Matters Our News Cassava, CBN

CBN to collaborate with IITA, NRCRI, on cassava, as ACAI steps up dissemination activities

In a bid to revitalize the cassava industry in Nigeria, the Central Bank of Nigeria (CBN) signed a Memorandum of Understanding with the Nigeria Cassava Growers Association and Large Scale Cassava Processors. The signing ceremony took place at a meeting held on Thursday with the governors of cassava-producing states in Abuja.

At the meeting, CBN governor, Godwin Emefiele, regretted that Nigeria imports cassava derivatives valued at about $600 million annually despite being a leader in cassava production and possessing several varieties of the root crop.

He announced that the apex bank would collaborate with the International Institute for Tropical Agriculture (IITA), Ibadan and the National Root Crops Research Institute (NRCRI), Umudike, in order to help farmers adopt improved varieties and best practices that would guarantee better yield, better processing efficiency, increased profit and improved standard of living.

According to him, the signing of the MoU was to guarantee steady off-take and processing of cassava in Nigeria, adding that the move would maximize local benefits of all the derivatives in cassava and save scarce foreign exchange.

He however stressed that repositioning the country’s cassava sector requires the involvement of research institutions especially the IITA and NRCRI, both of whom are already partners on cassava research projects.

“In achieving this goal, we are holding consultations with the International Institute for Tropical Agriculture, Ibadan and the National Root Crops Research Institute, Umudike,” Emefiele said. “Apart from foreign exchange conservation, increasing cassava production is a necessity as starch, glucose, sorbitol and other products currently being imported.”

Nigeria grows over 50% of the world’s cassava with over 4.5 million farmers growing the crop on 3.8 million hectares of land. Nevertheless, these farmers face challenges like soil and nutrient management, availability of improved germplasm and weed management.

To tackle some of these challenges the IITA and NRCRI, in conjunction with several other institutions, have collaborated on projects like the Cassava Weed Management Project (CWMP) and the African Cassava Agronomy Initiative (ACAI), which, after five years of research, have come up with recommendations that have been helping farmers double their cassava yield.

Both projects, now working as a single unit under ACAI, are currently disseminating agronomy recommendations to farmers across the country. The recommendations, which include the Six Steps to Cassava Weed Management and Best Planting Practices, are teaching farmers: best weed control methods, safe use of herbicides, best practices in fertilizer application, inter-cropping operations and Scheduled Planting activities.

Three Nigerian radio stations are already broadcasting the recommendations while extension agents from project partners are currently teaching the technology to farmers in rural communities. Digital extension tools and mobile apps are also in full use. These tools include Akilimo, Herbicide calculator, Airtel 321 service by Viamo, Cassava Seed Tracker and the Cassava Matters website where farmers, extension agents, researchers, policy makers, and other stakeholders in the cassava sector can assess a wide range of resources.

The aim of the training, according to Godwin Atser, ACAI Digital Extension & Advisory Services Specialist, is to empower farmers with the knowledge to boost cassava and maize productivity and yield per hectare. This will subsequently increase farmers’ incomes, better their livelihoods, and create jobs for more people.

In a chat with Newspeakonline, Atser explained, “the trainings are being done in close collaboration with state Agricultural Development Programs (ADPs) and other extension service providers.”

“Already the ACAI has developed videos and translated same into local languages – Igbo, Yoruba, and Tiv, targeting the respective zones,” he added. “We have also procured mini-projectors and mobile phones to empower extension service providers in the participating states.”