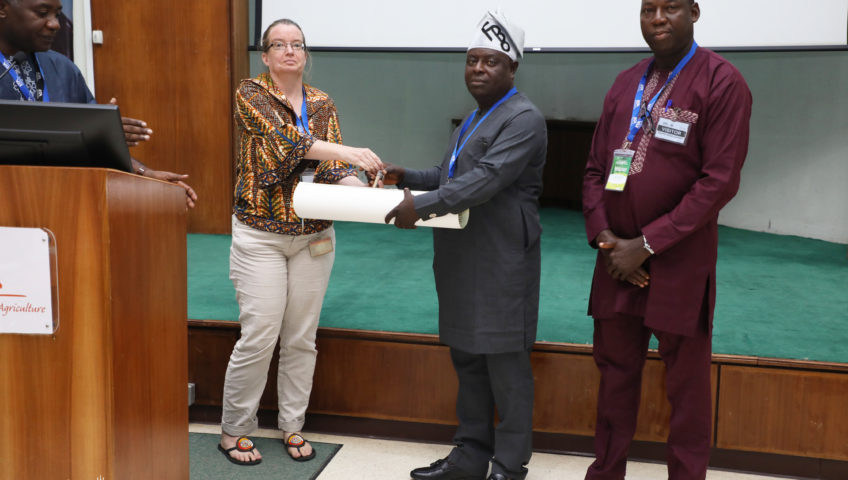 They noted that the digital tools were apt for the agricultural transformation plans of their governments.

His Ondo State counterpart, Adefarati said the digital innovations in extension services were coming at the appropriate time and expressed hope that they would be properly integrated into the existing traditional extension system for the benefit of farmers.

In his welcome remarks, IITA Director for Development & Delivery, Dr. Alfred Dixon, called for Concerted efforts on the use of digital tools that have been developed by IITA to revive the agricultural extension system.

He said the aim of the meeting was to share knowledge and digital tools developed in the last five years by IITA Cassava Weed Management Project and ACAI and other projects in IITA.

He explained that in the last five years, the IITA Cassava Weed Management Project had developed integrated weed control methods that are helping farmers to double the productivity of cassava and maize. He said the recommendations of the project were being scaled out to farmers through a variety of digital platforms in the framework of the African Cassava Agronomy Initiative (ACAI).

He noted that considering the challenges with traditional extension systems in Nigeria and Africa, the digital tools would enhance efficiency and effectiveness in disseminating knowledge to farmers.

In his presentation, Mr Godwin Atser, IITA Digital Extension & Advisory Services Specialist, stated that IITA’s approach to digitalization in agriculture was to complement the existing extension system and to offer practitioners with tools that would help them do their jobs better.

According to him, ACAI has developed agronomic recommendations in various Nigerian languages into videos, radio programs and the 3-2-1 IVR service on Airtel. He added that while the IITA Herbicide calculator would help farmers avoid herbicide under-dose and overdose, the Cassava e-Market provided a platform for farmers to sell their produce.

Lava Kumar, IITA Head of Germplasm Health Unit who spoke about the Cassava Seed Tracker said the web-based application aims to bridge the information gap in the agricultural seed sector and connect seed producers to their customers.

Dr Kumar stated: “The National Seed Council of Nigeria has bought into the digital Cassava Seed Trackers based on its numerous benefits and the app now serves as a means of registration for seed producers as well as certification. This will help the seed business that remains untapped as majority of farmers reuse seeds or buy locally.”

Speaking on Akilimo, IITA Systems Agronomist, Stefan Hauser, said the application was developed to deliver tailored agronomy recommendations to cassava growers at their various locations in the country.

“Akilimo will help the farmers make informed decisions on their investments,” he added.