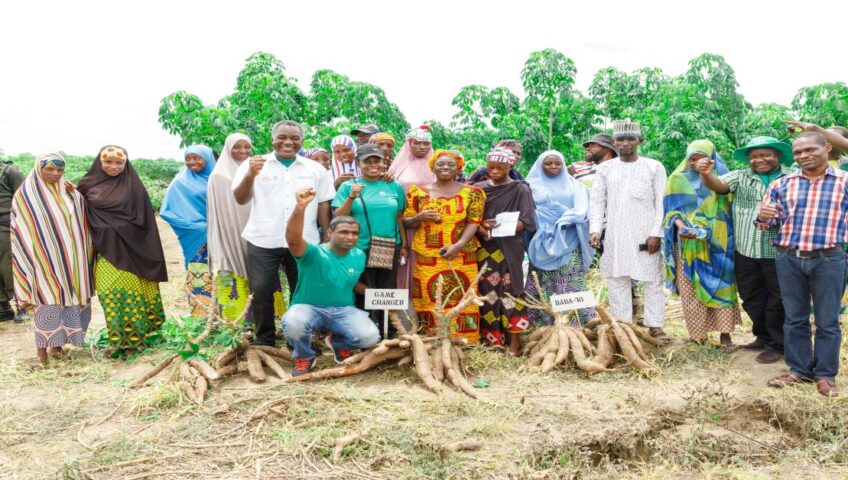 Farmers in Kogi and Benue recently expressed awe at the large sizes and number of roots produced by the new improved cassava varieties —Baba-70 and GameChanger— developed by the NextGen project as they joined to pull the crop to see what was below the ground during a farmers’ field day/ product launch.

They spoke about the difference between the new varieties and the old ones, saying Baba 70 and Game Changer yielded more than local varieties which they were used to. Some took a few stems to plant on their fields, saying they would love to adopt the new varieties.

Speaking at the event, Dr Ismail Rabbi, a molecular geneticist and plant breeder with  IITA, stated that years of consumer preference studies were conducted before releasing the varieties. “In addition to high yield and stress tolerance, we found that these varieties are suitable for several agro-ecologies. Farmers, processors and consumers love these varieties because they were high-yielding, stress-tolerant, disease-resistant and had the right food properties,” he said.

For Dr Mercy Diebiru-Ojo, who heads IITA GoSeed, the varieties would help raise the livelihoods of farmers. “I am confident that farmers who adopt these varieties will make more profit and improve their livelihoods. These varieties are also a huge contribution to food security,” she added.

As part of the launch, farmers and processors were taken to the field where the varieties were planted alongside an old improved variety, TME 419, 11 months ago and managed by Crest Agro. After an assessment of the field as well as the plant architecture, the farmers participated in harvesting some of the roots to compare with TME 419.

There was also a demonstration of the processing of the new improved cassava varieties to prove that their dry matter and starch contents were high and of great food value. Attendees witnessed the entire process from the farm to the table where they consumed garri, eba and fufu, chips and chinchin made from the two varieties. The meals were consumed with vegetable and egusi stew made with cassava leaves.

Speaking on the field, Dr. Vishnuardhan Banda, Product Manager for Crop Variety Development, IITA, expressed joy that the farmers and processors were happy with the new varieties and eager to plant them on their farms. He, however, urged them to always send feedback on the performance of the varieties to the researchers.

His words: “We want you to work with us. You are very important in the process of crop improvement. You are the farmers and the first consumers. We urge you to always tell us how these varieties are performing on your various farms. You have seen that these are very good varieties but we know that in years to come, you would need something new. Just keep giving us feedback about farmers’ choices and complaints, and we the breeders will be working with that information to give you new and better products.”

Ambassador Jaiyeola Lewu, a former Nigerian Ambassador to Brazil, Paraguay and Bolivia, and now a farmer, was present at the event. While commending the NextGen project and the IITA and NRCRI scientists, he described the varieties as game-changers in the agricultural sector, saying “farmers will benefit immensely from them.” He urged the project leaders to ensure that the products were available and accessible to the farmers who need them.

In his response, Dr. Godwin Atser, the Advocacy, Outreach and Promotions Lead of the IITA Building an Economically Sustainable Integrated Cassava Seed System, Phase 2 (BASICS-II) project, who spoke on behalf of Prof. Lateef Sanni, the Project Manager, stated that the BASICS-II project would use its seed system model (BASICS model) to ensure that farmers get access to new improved cassava varieties.

His words: “There is no gainsaying that farmers need new and improved varieties to improve their livelihoods, ensure food security and contribute to economic development. That is why we created the BASICS model, which links Cassava Breeding Programs with Early Generation Seed Companies like IITA GoSeed and Umudike Seed to multiply the foundation seeds that are passed on to cassava seed entrepreneurs who produce certified seeds for onward dissemination to farmers.”

The farmers’ field day/ product launch in Kogi took place on 19 while in Benue it took place on 23 May 2022. Among those who attended the event in Kogi were farmers, processors, and representatives from the Kogi State Ministry of Agriculture, Kogi State Agricultural Development Program, Nigeria Cassava Growers Association and other public and private sector stakeholders. IITA and NRCRI scientists were also in attendance.

The NextGen Cassava Project is being implemented by Cornell University, New York, in collaboration with the International Institute of Tropical Agriculture (IITA) and the National Root Crops Research Institute (NRCRI).