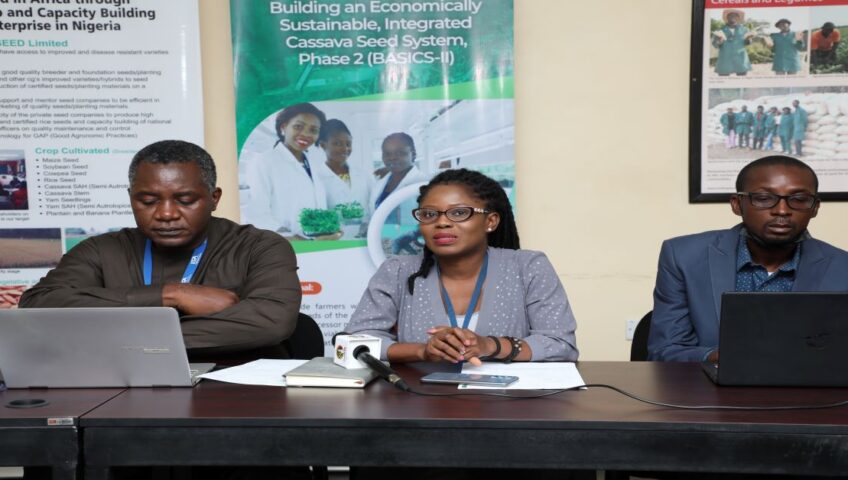 Improved varieties are the key to cassava productivity, job creation in Nigeria

Nigeria, the largest producer of cassava in the world, needs to adopt a new seed system approach to compete globally and keep the price of cassava-based foods stable and affordable in the country, experts have said.

Speaking at a media parley at the International Institute of Tropical Agriculture (IITA) on Wednesday, Prof Lateef Sanni, the project manager of the institute’s BASICS-II project, described cassava as the engine of economic growth and stressed that Nigeria must take advantage of the economic potentials of the root crop.

“Countries like Brazil, China, Thailand, Vietnam, and even Cambodia are reaping “gold” from cassava. These countries do not record less than 30 tons per hectare. However, farmers in Nigeria produce less than 10 tons due to poor performing seeds,” Prof. Sanni said.

According to him, “the goal of BASICS-II project is to provide farmers with access to affordable, quality-assured seeds of improved cassava varieties in demand by local food and processor markets through the establishment of a commercially viable seed value chain.”

“We are doing this using the seed system approach called the BASICS model. We are encouraging farmers to adopt new and improved varieties to improve productivity, raise incomes of cassava growers and seed entrepreneurs, enhance gender equity, and contribute to inclusive agricultural transformation,” he added.

In the words of the project’s Advocacy, Promotions and Outreach lead, Dr. Godwin Atser, “Improved varieties are key to changing that narrative of cassava. Adoption of improved varieties will increase cassava productivity, ensure food security, guarantee processors of quality raw materials,  and hinder the spread of cassava crop diseases on farms.

Apart from its economic and sustainability elements, Dr Atser said that the BASICS model had a job creation component.

“Today, we have hundreds of farmers across Nigeria and Tanzania that are engaged in cassava stem multiplication and marketing,” he explained, adding that “currently, the project has created over 400 of cassava seed entrepreneurs in Benue, Kogi, Abia, Delta, Cross River and Akwa Ibom States.”

Dr Mercy Diebiru-Ojo, a vegetative seed specialist and the General Manager of IITA GoSeed said that the Early Generation Seed Companies were responsible for multiplying the new varieties developed by the breeders in IITA, NRCRI, NextGen Cassava and other breeding programs.

She said: “At IITA GoSeed, we use new technologies to multiply the improved varieties and make virus–free stems available to the seed producers who will further multiply and sell to farmers. Our Semi Autotrophic Hydroponics (SAH) technology has helped us surmount the slow multiplication challenge we used to have in the past. Now we are multiplying virus-free cassava planting materials at a much faster rate such that within two years of release, the improved planting materials are commercially available.

The Operations Manager for IITA GoSeed, Akinyemi Ibikunle, also stated that the business of making improved varieties available to farmers is also a very lucrative venture for those interested in cassava seed production.