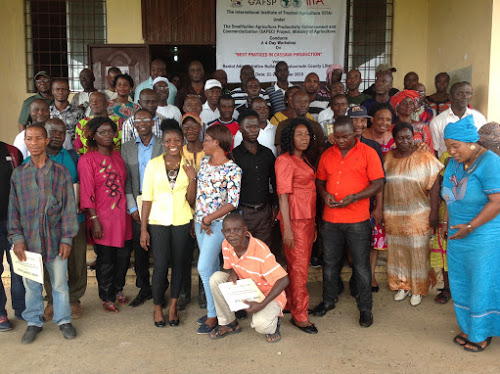 December 23, 2019 No Comments By Cassava Matters Our News Cassava, Liberia

A team of researchers working under the International Institute of Tropical Agriculture (IITA) led African Cassava Agronomy Initiative (ACAI) has trained about 70 extension service providers drawn across Liberia as part of efforts to transform the Liberian cassava sector.

The extension service providers were trained on the IITA-ACAI developed agronomy toolkit known as the Six Steps to Cassava Weed Management & Best Planting Practices which when applied on the field helps farmers to double their cassava yield per hectare.

The training was on the request and in the framework of the Smallholder Agriculture Productivity Enhancement and Commercialization (SAPEC) Project of the Ministry of Agriculture with funding from the Global Agriculture and Food Security Program (GAFSP) and the African Development Bank.

During the 4-day meeting, participants were exposed to the success/learnings of the IITA Cassava Weed Management Project, the basics of agronomy in cassava farming systems, calibration and the use of the IITA Herbicides Calculator, safe use of herbicides, overview of mechanisation and cassava varietal identification.
SAPEC coordinator described the training as an excellent program that would help transform cassava in Liberia and provide incomes to farmers.

Like Nigeria, cassava in Liberia has been undermined because of poor weed control. Hand weeding which is often carried out by women is not only back-breaking but has also limited farm sizes in Liberia.
Mrs Abibatu, a director with Liberia’s research institute (CARI) said: “Please IITA, we need you to support us to tackle weeds. Don’t leave us alone.”

Dr Edet said the workshop was intended to provide participants with basic knowledge in cassava production and especially weed management.

“This is part of what we are supposed to do in the SAPEC Project, we are supposed to empower the farmers, the focal persons, technicians with the knowledge on weed control because weeding consumes a lot of money and as such farmers run away from cassava farms as the result of the huge cost of the control of weed.”