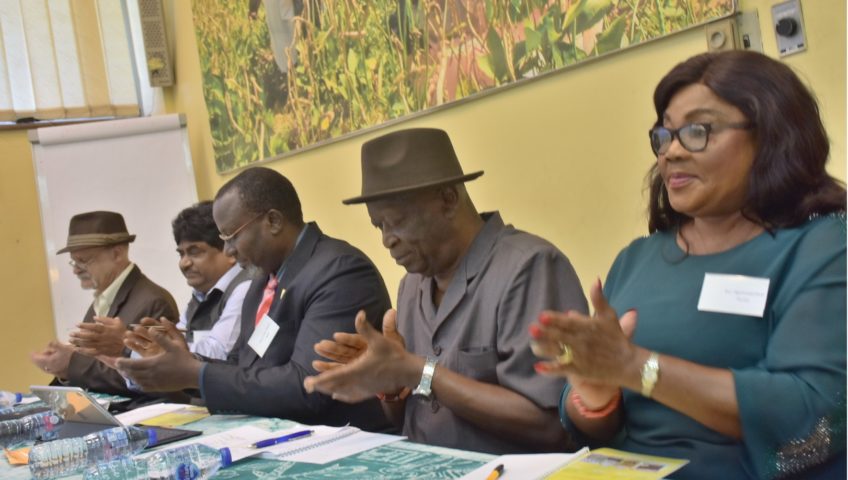 Weeds constitute major obstacles to food security in Africa. They are not only a major problem to cassava farmers but also a menace to farmers of all other crops. Dr Alfred Dixon, Director for Development & Delivery at the International Institute of Tropical Agriculture (IITA), Ibadan while speaking at the inauguration of a new herbicide (Life Line herbicide by UPL) on 19 June 2019 to the Nigerian market said hoes and cutlasses cannot help Africa to address food security. He therefore called for the adoption of inputs especially herbicides to enable farmers to expand their farm sizes. According to Dr Dixon, the introduction of Life Line was timely because of the plan to ban the use of Paraquat—a product that has been found to be injurious to human beings and the environment.

Dr Dixon who has been a cassava breeder for more than 20 years in IITA advised UPL to make the chemical available and promote it all over Africa. He noted that improved varieties of cassava developed at IITA have the potential to produce between 60 and 80 tons per hectare, but that this could be attained by farmers who depend on the hoe and cutlass in their agricultural practices.  Dr Dixon reiterated that in advanced countries of the world, weeds have been effectively controlled with herbicides.

Earlier in a presentation on the efficacy of the herbicide, Professor Friday Ekeleme (ACAI Principal Investigator on Weeds), who has conducted experiments in five states of the Federation on the use of various herbicides for the control of cassava weeds, said Life Line herbicide performed better than all others used at the experiments. He said poor weed control in cassava often results in yield loss of up to 90%. Prof. Ekeleme recommended that the manufacturer should create awareness on the efficacy of the herbicide for the benefit of farmers.

LIFE LINE herbicide is a broad spectrum non-selective, non residual post emergent herbicide. It is effective on a wide range of annual and perennial weeds covering broadleaf and grasses. It has excellent burn down of wide range of weeds with minimum resurgence, unique contact action and nominal systemic action, making it a product of choice among non-selective herbicides. It has no residue on soil or clay particles, hence, it is an absolutely safe and environment friendly herbicide. “Lifeline will be a perfect replacement for paraquat which has been banned in many countries and a better alternative in countries facing regulatory problems on glyphosate,” Prof. Ekeleme said.

The IITA Deputy Director General, Partnerships for Delivery, Dr Kenton Dashiell commended the stakeholders for their patriotic position to ensure the safety of farmers and the environment. He said IITA has made substantial contributions to improving the lots of African farmers in its 52 years of research. He added that since about six years ago, “we have established a Directorate of Partnership for Delivery, with the objective of encouraging the Private sector to support rural farmers to adopt the improved technologies because we cannot do extension”. By bringing them in as partners IITA is able to make life much better and more profitable for farmers…” and that is all about Agricultural Transformation in Africa,” he concluded. During the formal presentation of the herbicide which was in a 500 ml bottles, Mr. Tarun Das, Managing Director, Springfield Agro Ltd, highlighted the activities of the company which has been in Nigeria for several years. He spoke about the activities of Afprint one of the largest Textile companies in Nigeria in the past. According to him Afprint was supporting over 30,000 farming families who were outgrowers of cotton for the Textile Company. “However, when the Nigerian Textile Industry collapsed, then we ventured into agrochemicals production,” he said. Mr. Tarun Das commended the Nigerian government and IITA for doing the needful to support the rural farmers to maximize profit from their farms through application of environment friendly herbicides for weed control.