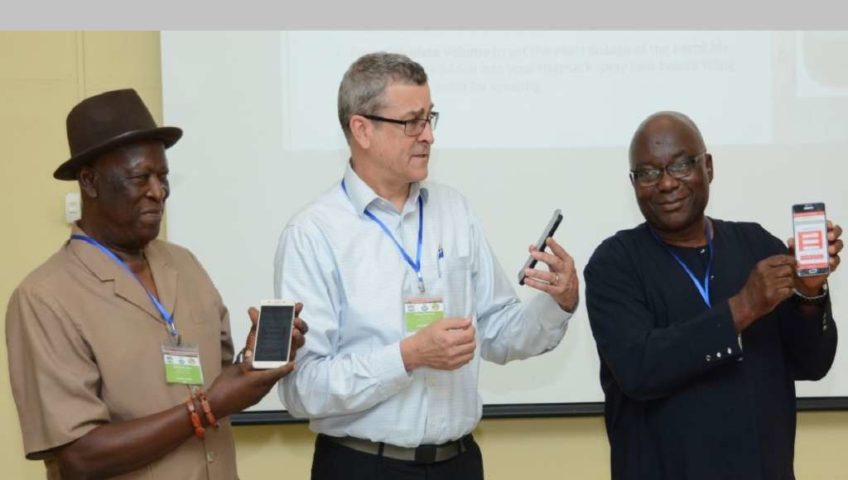 A mobile phone application (mobile app) that enables farmers to control weeds through efficient use of inputs has been launched in Ibadan with more than 1,000 downloads from Google Play store.

The app known as IITA Herbicides Calculator, which was developed by a team of researchers working for IITA under the IITA- Cassava Weed Management Project (now merged with IITA- African Cassava Agronomy Initiative (ACAI)), helps resource-poor farmers to maximize the use of their inputs by allowing them to determine correctly the quantity of herbicide needed to add to a knapsack for a given spraying operation.

The inauguration of the app by Lawrence Kent of the Bill & Melinda Gates Foundation during the 5th annual meeting of the IITA-Cassava Weed Management Project (IITA-CWMP) gave free access to farmers and other users to download the app from Google Play Store and use on their farms.

In most rural farming communities in Africa, the knapsack sprayer is a common equipment used for herbicides application. However, the challenge farmers face is mostly wrong application of herbicides as many cannot manually calculate the quantity of herbicide needed to load in the sprayer per given operation, says Godwin Atser who envisioned and developed the concept of the mobile app with Ubong James—both working for IITA-ACAI.

With the mobile app, farmers by the click of four buttons on their mobile phones are able to know exactly the quantity of herbicides they need to load in their sprayers.

Reviewers on Google Play Store said the App was a game changer that would revolutionize cassava farming in particular and agriculture in general.

“This is a brilliant idea for our farmers. With this mobile app, I strongly believe farmers will find it easy to follow recommendations on labels religiously. Kudos to the IITA Cassava Weed Management Project,” Mr Alagbo Oyebanji, a reviewer of the app said.

Reviewers emphasized that the mobile app would help farmers in their weed control activities which would result in increased yields and more profits. “This is an excellent app for precision agriculture. Very useful tool for resource poor farmers,” Shuaibu Abraham Attah—another reviewer added.

Although the app was developed in the context of weed control in cassava farming systems, its application covers other arable crops such as rice, maize, soybean, and wheat.

The IITA herbicide calculator received a 4.8 review rating on a scale of 5 from users who have downloaded it from Google play store.

Dr Alfred Dixon (Project Leader, IITA-CWMP), and Prof Friday Ekeleme (Principal Investigator IITA-CWMP) expressed confidence in the impact the IITA Herbicide Calculator would have in the cassava farming system. “The herbicide calculator will change how cassava farmers control weeds on their farms as they can now calibrate accurately the required herbicide for their farm size,” they said.