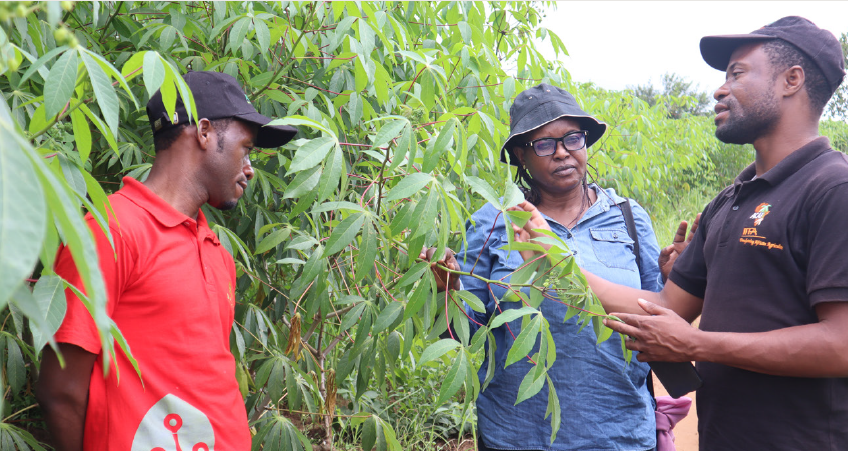 November 20, 2021 No Comments By Cassava Matters BASICS II, Cassava in the News, Our News

With 70% of families in Handeni District, Tanga region, suffering from food insecurity and hunger for years, poor performance and dropouts in schools were rife. In seeking a sustainable solution, the district leaders and agriculture department had to leverage that growing cassava as a food crop was an immediate option to fight hunger and malnutrition in schools because of its drought tolerance.
Four years after introducing cassava to the district, primary school pupils’ retention improved from 18% in 2015 to 77% in 2019, while academic performance improved from 58% in 2015 to 88% in 2020. These positive impacts increased the demand for more cassava within the community. The district leaders then had to find new ways to increase availability and access to cassava seed materials for increased cassava production, marking the beginning of the Handeni Model.
The Handeni model is a collaborative approach used by the Handeni district leadership and other stakeholders to increase food security, improve nutrition, and provide income to families through cassava production.
The district leadership invited the Building an Economically Sustainable Seed System for Cassava in Tanzania (BEST Cassava) project to increase the availability of clean seeds of improved cassava varieties. BEST Cassava is implemented by MEDA, IITA, and the Tanzania Agricultural Research Institute (TARI).
The BEST Cassava team linked the district to formal cassava seed system entrepreneurs to supply clean planting material to farmers. The district also partnered with banks and secured a bank loan worth 3 billion Tshs for its farmers for cassava production. They provided a market linkage by partnering with cassava processors to purchase the cassava roots as dried chips once harvested. The district linked with markets, including cassava starch processors, who got an assured market supply for the product in and out of the country.
The stakeholders endorsed the collaboration and they agreed that the root crop is underutilized in the district.
The banks identified the opportunity to work with the small business sector because the district had invented a sustainable system that involved essential stakeholders along the value chain that assured minimal risks on returns from the loans they provide to farmers.
“Our initial objective was to grow cassava for food security, to save our community from hunger because the late president John Pombe Magufuli gave directives to stop providing food aid to regions affected by hunger,” said Mary Missokia, the district’s Cassava Coordinator.
According to Beneath Behutha, Operations Manager, Dar Canton Investment, the model guarantees cassava supply from farmers for our industry. “We also expect to have good quality since farmers are closely working with experts,” he said.
“Through the collective model, we are assured of a sustainable market of clean cassava seeds because the local government has offered us the tender of distributing the seeds to farmers in Handeni. This has challenged us on logistical arrangements to deliver in time and expand our seed farm sizes that will accommodate farmers’ orders,” explained Raymond Nziyajose, a member of Cassava Seed Entrepreneurs.
“On product market aspects, we are also guaranteed quality and enough cassava roots for starch processing for our export market because the district management has connected us directly with the farmers who produce cassava,” added Beneath. “This model is a good deal for us as bankers because there is risk-sharing of investments among stakeholders.
John Machunda, the Manager of NMB bank, noted that the government acts as a middleman who supervises the farmers to follow the agronomy practices to get the products expected. “It also acts as a sponsor to ensure loan returns,” he said.
“I am glad to have the opportunity to access a bank loan; also the access to clean seeds of improved varieties like Mkuranga,” said Alamin Baruti, a farmer from Handeni.
Missokia said that by working with experienced researchers from IITA and MEDA, Handeni farmers and extension officers could learn about cassava agronomy practices. “Our district used to be a maize-growing area; many had little knowledge of cassava production. Even our extension officers had forgotten about it. Farmers have learned a lot about cassava through this model.
She revealed that misunderstandings even broke out between the farmers and seed distributors on the delay of providing seeds because farmers wanted to apply what they learned.”
However, the Handeni model stakeholders noted that there are lessons for improving the model and scaling up. The lessons include increasing availability and access of clean improved cassava seeds to farmers, increased investment in cassava seed production, intensive and proper vetting of farmers groups who are cassava agripreneurs, and increased awareness about the Handeni model and its procedures among farmers. Capacity building for farmers on entrepreneurial mindset in their cassava farming activities also came up.
Handeni is one among eight districts of Tanga region in the northern part of Tanzania. For many years Handeni community grew maize as their primary staple food until 2016, when maize productivity significantly dropped due to unfavorable climate conditions that led to food insecurity. The district leaders then decided to introduce the cassava crop.