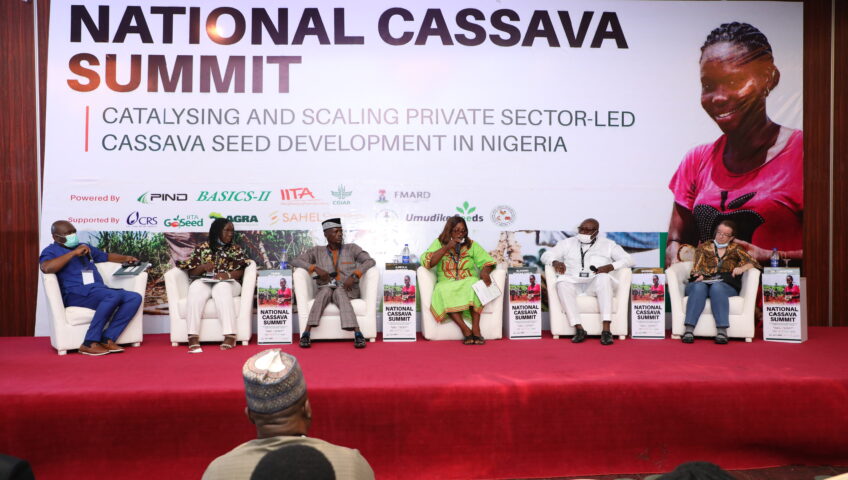 A new seed system model developed by the International Institute of Tropical Agriculture (IITA) under the Project—Building an Economically Sustainable Cassava Seed Systems, Phase 2 (BASICS II) is helping African countries such as Nigeria and Tanzania to ramp up yields to more than 25 tons per hectare, experts and farmers revealed at the recently held National Cassava Seed Summit in Abuja.

Known as the BASICS model, the seed system approach creates an ecosystem of seed actors – breeder, foundation, and certified seed producers. It ensures that seeds of improved and virus-free cassava varieties are multiplied and disseminated to farmers through a value chain in an economically sustainable manner.

Though Nigeria is a global leader in cassava production, yield per hectare has stagnated at below 10 tons per hectare, a situation that makes growers uncompetitive. In contrast, Asian farmers record more than 20 tons per ha from their farms.

The Foundation for Partnerships Initiatives in the Niger Delta (PIND), one of the users of the model, said their farmers using the BASICS model have seen yields climb to more than 25 tons per hectare.

“This is besides the sales of stems,” James Elekwachi, an economist with PIND, said during a panel discussion at the Summit themed “Catalyzing and Scaling Private Sector-Led Cassava Seed Development.”

Two years ago, the BASICS-II project backstopped farmers working in the Niger Delta under the PIND program. Through the support, PIND established 150 Commercial Seed Entrepreneurs (CSEs) using the BASICS model.

According to Mr Elekwachi, the program recorded huge success with farmers buying and selling certified stems in the Niger Delta.

Farmer George Ajabor, one of the CSEs in the Niger Delta, said the BASICS model had made him a successful seed farmer who grows and sells improved virus-free stems to farmers in the region.

He said: “It was a great turnaround when I was introduced to the production of improved cassava stem. Since then, I have been producing and selling to farmers in the Niger Delta. I also train other farmers in stem production.”

Another panelist and Director at the National Root Crops Research Institute (NRCRI), Umudike, Dr Godwin Asumugha, described the BASICS model as a “game-changer.”

The expert is using the BASICS model to establish CSEs under the International Fund for Agriculture Development (IFAD)-supported value chain project.

“The BASICS model is an effective approach to sustainably push improved varieties across Nigeria,” he stated.

He called on the Federal Government of Nigeria to adopt the model to disseminate improved virus-free planting materials across the country. While urging the  youths to go into cassava seed business, he encouraged financial institutions to emulate  Sterling Bank to assist the CSEs.

For Dr Godwin Atser, who is leading the Advocacy, Promotion and Outreach team at IITA, the BASICS model, apart from its economic and sustainability elements, also has a job creation component.

“Today, we have hundreds of farmers across Nigeria and Tanzania engaged in cassava stem multiplication and marketing,” he noted.

“The CSEs and FSPs comprise men and women who are growing cassava using their own resources for seeds (stems) business. We linked them to IITA GoSeed for the procurement of seeds, ” he said, adding that the approach “builds sustainability.”

He called on the government and local authorities to invest in the seed system and to provide the enabling environment for the cassava seed system to thrive.