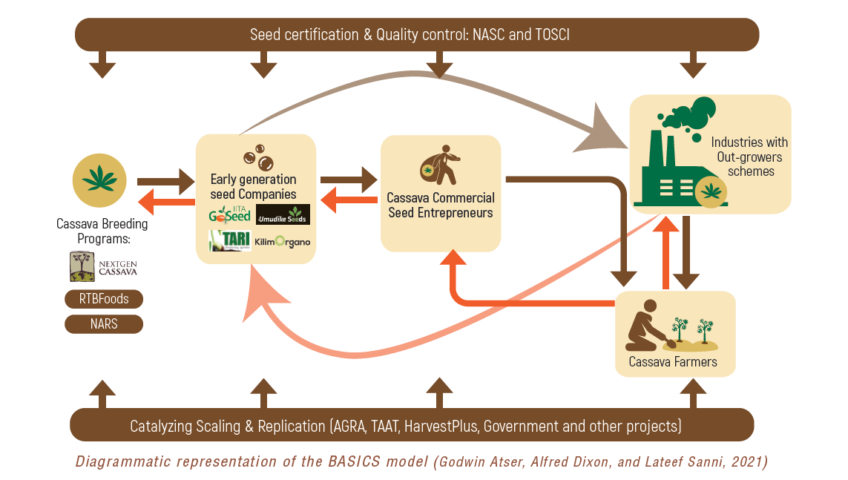 …As the project scales out to new geographies

A seed system model known as the BASICS model is helping farmers to establish and formalize the seed system in cassava, creating jobs, wealth, and food security in cassava growing areas.

“The model has been adopted by the Foundation for Partnership Initiatives in the Niger Delta to create 150 commercial seed entrepreneurs in the Niger Delta,” said Prof Lateef Sanni, Project Manager of BASICS-II Project, at the annual review and planning meeting recently.

“In addition, a GIZ-funded project for Cassava & Maize value chain is using the model to scale cassava seed system to additional states—Oyo and Ogun—in the South Western part of Nigeria,” he added.

But beyond Nigeria, the BASICS model of formalizing the cassava seed system is gaining appeal across different parts of Africa.

“The appeal is driven by the desire of countries to transform cassava, rev up productivity and address food security,”  Godwin Atser, Advocacy, Promotion, and Outreach Lead at the International Institute of Tropical Agriculture (IITA) said.

“In Tanzania, for instance, the model is being replicated to scale cassava seed system to 200 seed entrepreneurs in new local government areas, thanks to funds from Cornell University. In addition, the same approach is being used to establish a commercial seed system in Kenya under the leadership of MEDA,” he explained.

Once described as a poor man’s crop, cassava is rapidly undergoing a transformation as demand for food, feed, and industrial uses soar. However, access to improved planting materials has remained a significant bottleneck to realizing the full potential of cassava in Africa. In most cases, farmers use local varieties that are low-yielding and prone to disease. This practice of planting local varieties that are often diseased denies farmers the benefits of cassava farming.

Godwin lauded the Central Bank of Nigeria (CBN) on its decision to lend only to growers using improved varieties, stressing that it would positively impact profitability and the ability of farmers to repay loans.

He said BASICS-II project was developing a network of commercial seed entrepreneurs to provide farmers access to quality and disease-free planting materials.

Dr. Alfred Dixon, the Director of Development and Delivery in IITA, said the seed system should get to a level where a seed producer would single-handedly supply planting materials for a thousand hectares.

His words: “I want to see a situation where, by the end of the second year, a farmer will say, ‘I want to plant 1000 hectares, and we can confidently say, ‘Go to this particular seed producer to get quality planting materials for 1000 hectares.’ I also want to see the volumes of the Early Generation Seeds production increase significantly in Year 2.”