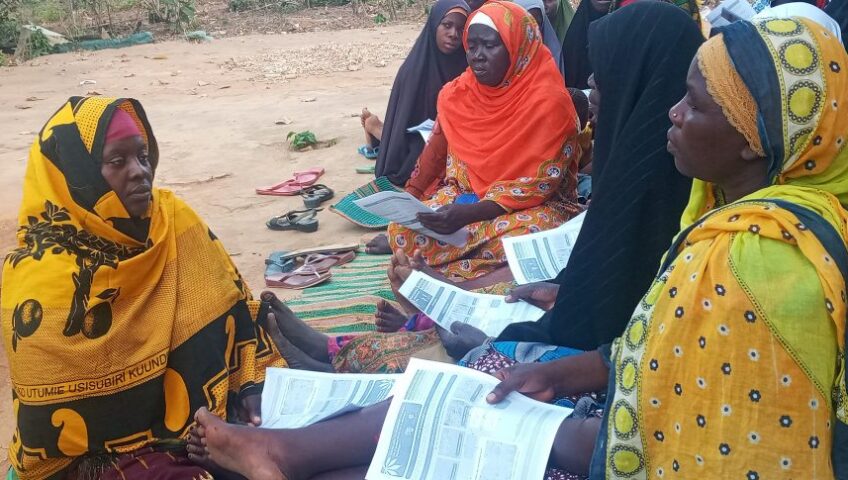 November 19, 2021 No Comments By Cassava Matters Cassava in the News, Our News, Press Releases

When coupled with other information Communication technology (ICT) like mobile phones, radio is an effective tool helping farmers make informed decisions that support the adoption of innovative agricultural technologies as listeners can voice their views through phone-in radio programs. In this light, the AKILIMO team from the African Cassava Agronomy Initiative (ACAI) partners with Newala FM, a community radio station managed by the Newala district in the  Mtwara Region of Tanzania, to disseminate AKILIMO content to a broader audience.

The team provided the AKILIMO content to ‘Shamba na mkulima’ (The farm with a farmer)— an educational and informative program disseminating agricultural information to farmers. The aim was to increase awareness about AKILIMO content to the Newala district farmers.

Together with the extension officers, the team also organized seven radio listening groups for cassava growers to listen to the program more interactively and collectively. “The groups were supervised by the extension officers who also provided the AKILIMO printable guides to the farmers and got the opportunity to ask questions and give suggestions,” said Ally Ngádoa, Research Assistant and AKILIMO Scaling Promoter at IITA.

The program is an hour presentation on the Six Steps to Cassava Weed Management and Best Planting Practices. Listeners got the opportunity to call in and ask for clarifications and give their suggestions on cassava growing and farming in general.

In response to one of the questions asked about types of fertilizers to apply during the planting and growing time of cassava, Ng’adoa said: “We recommend farmers to use NPK 17:17:17 as planting fertilizer, and MOP and Urea as growing fertilizer.”

Hamis Tambwe, a beneficiary of AKILIMO training, was among the listeners who followed the whole radio program and called in to appreciate the training he received. “I am grateful for the training I received as it led to an increase in my cassava yields,” said Hamis.

In their feedback to the extension agents, the farmers listening groups said the program’s content helped them understand the steps to improve productivity and yield.

The program coverage reached five districts including Newala, Tandahimba, Masasi, Nanyihamba, and Mtwara rural.The team has agreed to collaborate with Newala FM to provide farming practices to sustain the program that earlier stopped due to lack of content.