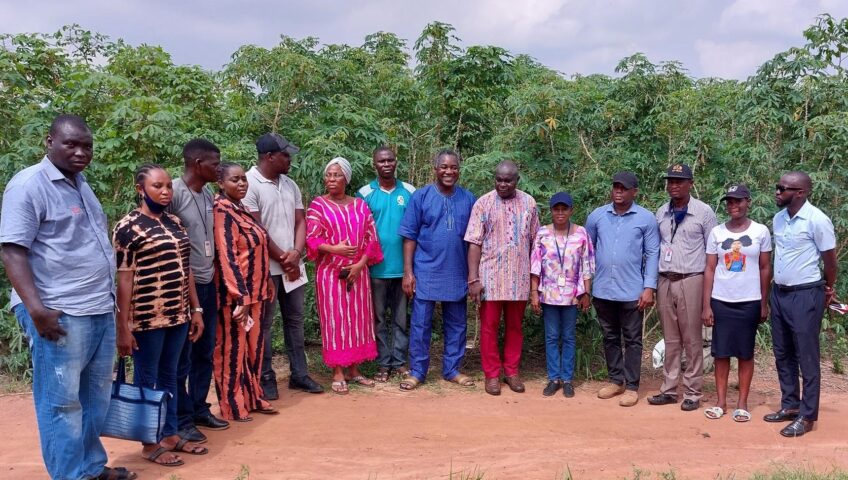 The quest for food security is an onerous task amid Covid 19, climate change, harsh operating environment and the likes. The International Institute of Tropical Agriculture (IITA) and other partners were on field trips recently to have first-hand information on how its GIZ-funded cassava and maize value chain project has impacted the lives of Cassava Seed Entrepreneurs (CSEs).

The GIZ-funded Cassava and Maize Value Chain project, which ends in 2022, was developed in response to the Covid 19 pandemic that affected the value chains of several crops, including cassava, and the livelihoods of millions of farmers, women and youth that depend on the root crop for survival.

In the past 18 months, the Project has built resilience in the cassava seed system and put smiles on the faces of farmers by establishing an economically sustainable seed system. Sixty farmers are now growing improved cassava varieties ready to be deployed to the market for sale and further stem multiplication.

Far away in Okelopa Sotubo, Shagamu Local Government Area in Ogun State, Mrs Temitope Esther Solomon, a beneficiary of the Project, is basking in euphoria as she looks forward to a bountiful harvest from cassava stems.

“This intervention has made me a proud farmer,” she said, admiring the radiating beauty from her cassava farm.

Before foraying into cassava stem production, Mrs Solomon tried to grow rice on two occasions in the past but failed, no thanks to climate change. When she decided to cultivate cassava, she was denied access to improved cassava varieties because of COVID 19, which shut down businesses and restricted the movement of people and agricultural products and inputs.

The GIZ intervention brought significant relief by supporting farmers to establish sustainable cassava seed systems so that farmers could sell both cassava roots and stems.

Mrs Solomon, who is now a proud owner of 10 hectares of cassava seed farm, described the intervention as one of the surest ways to help Nigeria attain food security while creating wealth and job opportunities for the county’s teeming youths.

“I am happy today because I am going to sell both cassava stems and roots. The improved varieties (Dixon and TME 419) make me feel happy,” Mrs Solomon added.

She explained her plans to expand her cassava farm this year by getting more members of her cooperative group to purchase the improved varieties and grow them on their farms.

She, however, called on the federal government to complement the efforts of the Project by making tractors available for land preparation, adding that there are many ‘virgin’ lands available for cultivation across the country.

“There are so many arable lands suitable for cassava production, but the cost of renting a tractor is on the high side. Land preparation is still a major challenge hindering the opportunities in this sector. My cooperative has over 30 hectares of land but no tractors to prepare the land for cultivation,” she lamented.

Under the GIZ Cassava & Maize Value Chain Project, seed entrepreneurs did not only get access to affordable, quality-assured seeds of improved cassava varieties, they went through an intensive training on the Six Steps to Cassava Weed Management and Good Agricultural Practices (GAP) for sustainable cassava production.

Another beneficiary of the Project, Mrs. Gbadebo Adejoke, in Odeda Local Government Area of Ogun State, commended the Project, saying that she was exposed to better planting practices and new, improved cassava varieties.

“I am very happy to be part of this project, and I have plans not to sell my stems but to expand my farm,” she said.

Mrs Gbadebo, a cassava seed entrepreneur, grew the cassava variety called Ayaya with a yield potential of more than 30 tons per ha. Admiring the vigour of her farm, she said, “There are many cassava farmers that want to key into this project, and we will be very happy if this project would bring more people on board.”

Mrs Gbadebo, whose farm sits on one acre, attracts dozens of farmers in the community who come to learn and gain insights about the cassava seed system.

Overtures from fellow farmers to buy the stems from Mrs Gbadebo have not yielded results because of her desire to expand her field.

“I plan to cultivate more hectarage and multiply this variety before I start selling. My fellow farmers want to buy the stems, but I refused to sell this year because it is not enough for me,” she explained.

The GIZ Technical Advisor responsible for the Project, Mr. Divine Torkutsah, said the grant agreement with IITA was to support farmers to recover from the impact of COVID-19. He stressed that the Project was developed in consultation with federal and state partners. He said cassava seed challenges, particularly in Ogun and Oyo State, were identified as the as major bottleneck to the cassava sector.

“So, the Project looked at supporting farmers to have access to improved and clean cassava seeds. And as we have seen, the module was such that we have farmers who received breeder stems from IITA GoSeed and would be producing foundation seeds. Then these farmers are further linked to other sets of farmers producing commercial (certified) seeds for sale to cassava farmers. Through this approach, the Project created entrepreneurial opportunities for cassava seed farmers and spray service providers within the cassava seed value chain.

“From what the beneficiaries said: ‘This project has positively impacted their lives, and they are anticipating an increase in their income,’” he said.

In the words of the Project Manager, Dr. Godwin Atser, “Improved varieties are key to changing the narrative of cassava. Adoption of improved varieties will increase cassava productivity, ensure food security, guarantee processors of quality raw materials, and hinder the spread of  diseases attacking cassava.”

He explained that the Project was successful because it adopted the BASICS Model which promotes entrepreneurship and job creation along the cassava seed value chain.

“Today, we have dozens of farmers across Ogun and Oyo states that are engaged in cassava stem multiplication and marketing,” he explained.

The Vegetative Seed Specialist and the General Manager of IITA GoSeed, Dr. Mercy Diebiru-Ojo, said that GoSeed was responsible for supplying improved cassava varieties to the seed entrepreneurs in Ogun and Oyo states.

She said: “At IITA GoSeed, we use new technologies to multiply the improved varieties and make virus–free stems available to the seed producers who will further multiply and sell to farmers. Our Semi Autotrophic Hydroponics (SAH) technology has helped us surmount the slow multiplication challenge that we used to have in the past. Now we are multiplying virus-free cassava planting materials at a much faster rate such that within two years of release, the improved planting materials are commercially available to seed entrepreneurs. This is good news to our cassava seed entrepreneurs.”