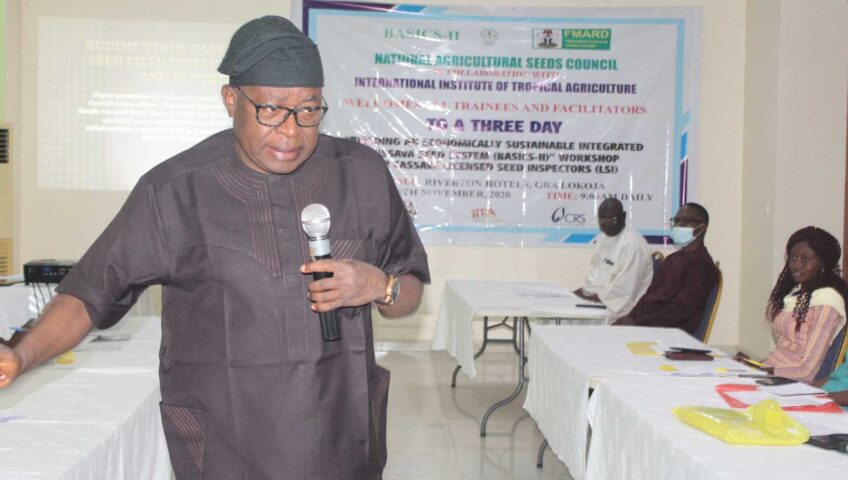 The National Agricultural Seeds Council (NASC) has trained 38 third party seed certifying agents in Kogi and Benue States, as part of efforts to ensure the effective regulation of the seed industry and offer farmers easy access to seed certification.

The training, which was conducted in the framework of the Building an Economically Sustainable Integrated Cassava System, Phase 2 (BASICS-II) project aims to give farmers access to improved and disease-free cassava varieties.

The Director General of NASC, Dr. Philip Ojo said the training was in response to the Agricultural Seeds Act 2019, which empowered the council to outsource seed certification to further entrench efficiency in the seed certification process in the country.

According to him, after a painstaking screening of aspirants, 20 candidates were selected to be trained as third party agents that will carry out private seed certification for cassava in Kogi state, just as 18 agents had earlier been trained in Benue state.

He added that Nigeria must join the global trend by engaging private entities to complement the National seeds regulator just as it is being done in South Africa, Zimbabwe, Zambia and Ghana.

While assuring the trainees of the cooperation of the Council and other partners in regular update of their knowledge and capacity, Dr Ojo charged them to utilize the training for quality service delivery to rid the country of substandard seed materials.

Reverend Gabriel Aina, a participant, commended the NASC for the training as it had afforded them the opportunity to know the nitty-gritty of what it takes to have a bumper harvest.

He added that the training, held 4-6 November, had equipped him to know the difference between crops/grains and seeds, adding that in the past, he would just go to the market and buy whatever was called seed without knowing the standards, stressing that ignorance had affected many farmers.

Aina called on the government of Nigeria to take the comparative advantage she had in cassava production for economic growth and development of the country, and promised to share with other farmers the skills learnt to make a difference in the cassava value chain.