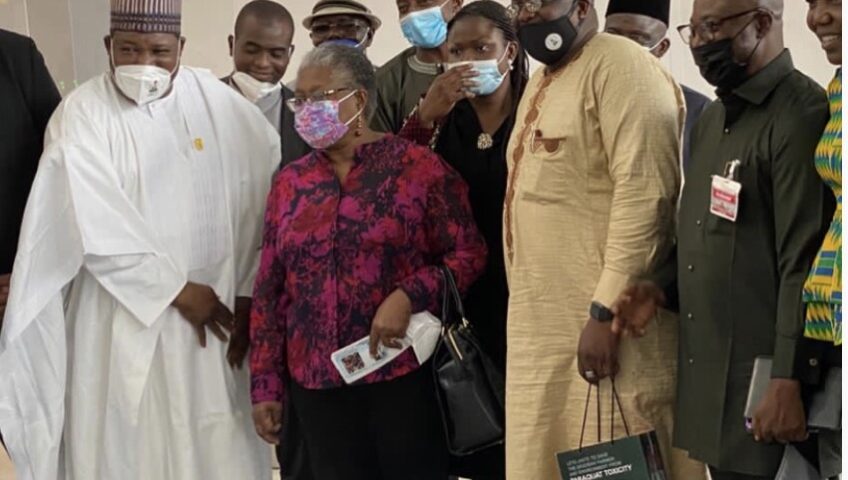 May 17, 2021 No Comments By Cassava Matters Our News Herbicides, Paraquat

The Director-General of the World Trade Organisation (WTO), Dr. Ngozi Okonjo-Iweala, has been urged to support the ban on Paraquat in Nigeria.

The Coalition Against Paraquat (CAP) in Nigeria, represented by one of its members, Prof. Mohammed Kuta Yahaya, made the plea recently in Abuja during a meeting with Dr. Okonjo-Iweala, who visited her home country shortly after assuming office as WTO DG.

Prof. Yahaya, a professor of Agricultural Extension & Development Communication, who spoke on behalf of the CAP during interactions with Dr. Okonjo-Iweala, urged the WTO to discourage unhealthy trade practices like dumping Paraquat in countries like Nigeria.

He appealed to the WTO boss to lead advocacy that would discourage Paraquat manufacturers worldwide from marketing the dangerous chemical to developing countries.

In her response, Dr. Okonjo-Iweala expressed concern over the situation and promised she would take the message to Geneva for discussion and possible action.

Paraquat is the active ingredient in some popular brands of herbicides currently on sale and in wide use in Nigeria and some other developing countries. It is associated with diseases of the liver, lungs, kidneys, and nervous system.

In 2019, the National Agency for Food and Drug Administration and Control (NAFDAC) announced a gradual phase-out plan for Paraquat and a total ban in 2024.  However, Prof. Yahaya said that the CAP would remain a watchdog and advocacy group that would support NAFDAC to follow through with its Paraquat deregistration plans.

He commended Dr. Sani Nasir Gwarzo, the Permanent Secretary, Federal Ministry of Industries, Trade, and Investment, for his efforts against the dumping of toxic herbicides in Nigeria.

Calls for the deregistration of Paraquat in Nigeria heightened in 2019 when foreign, and Nigerian-based researchers raised health concerns associated with using the chemical. In separate reports submitted to NAFDAC, Dr. Udensi Udensi, a weed scientist and agronomist at the University of Port Harcourt, Rivers State; Prof. Steve Weller, a retired professor from the Purdue University, United States; and Charles Riches, from UK’s Agherba Consultants, highlighted the dangers of Paraquat use in Nigeria.

The CAP, which comprises eminent Nigerian scientists and media practitioners with rich experience in advocacy, and a deep understanding of Paraquat, has vowed to ensure that Nigeria does the needful by deregistering Paraquat.