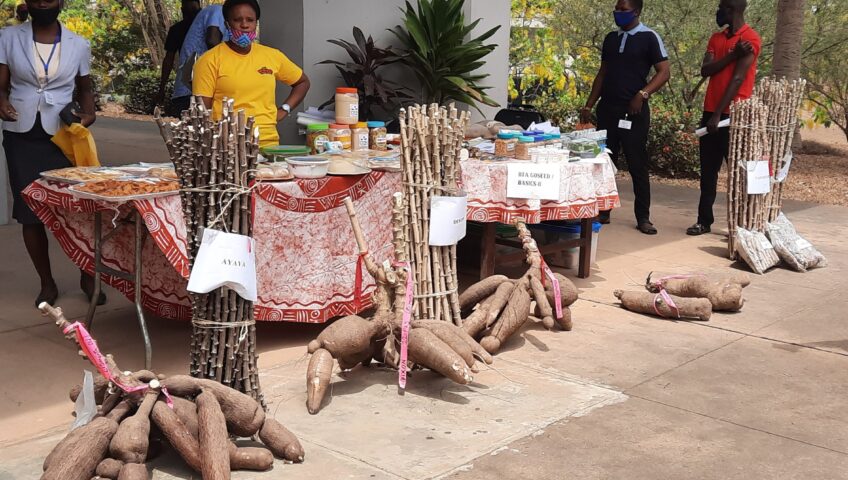 March 20, 2022 No Comments By Cassava Matters BASICS II, Cassava in the News, Our News, Press Releases

…As BASICS-II  webinar attracts over 200 participants

To help cassava farmers have easy access to improved cassava planting materials for the 2022 planting season, the Building an Economically Sustainable Integrated Cassava Seed System, Phase 2 (BASICS-II) of the International Institute of Tropical Agriculture (IITA), organized a webinar for experts and farmers.

The webinar themed: “Accessing clean and improved cassava planting materials for the 2022 planting season”, attracted over 200 people who participated in the event which was held via Zoom on 10 February 2022. The online event organized in conjunction with the GIZ-GIAE/IITA Cassava & Maize Value Chan Project was a deliberate effort to create demand and show cassava farmers where and how to access clean and quality cassava stems of improved varieties.

In an opening address, Prof Lateef Sanni, Project Manager of BASICS-II, said the webinar was an opportunity to ensure sustainability in the distribution of clean and quality seeds of improved varieties ahead of the new planting season.

Dr Diebiru-Ojo spoke on the benefits of using new and improved varieties in her presentation. According to her, the new varieties were high yielding, tolerant of environmental stress, and resistant to pests and diseases.

“We have seen most improved varieties yield more than 30 tons per hectare, against the less than 10 tons farmers usually get from the old local varieties. The improved cassava varieties are also disease-free, suitable for various agro-ecological zones and have high starch content, which industries require. Processors also look for some of these varieties because they have fantastic food qualities.”

She explained the role IITA GoSeed was playing in making the seeds available, noting that the company was using the Semi Autotrophic Hydroponics (SAH) technology to speed up the multiplication process so that farmers could have access to the varieties they wanted.

Mr. Nzenwa, who heads Umudike Seeds, noted that the company, an early generation Seed Company like IITA GoSeed, was entirely on the ground to make improved varieties available to farmers in the South East, South-South and other parts of the country. He said that like IITA GoSeed, Umudike Seeds also has an entrepreneurship program for interested seed producers.

On how improved varieties will be delivered to farmers in an economically sustainable manner, Dr. Atser, who is also the Project Manager, GIZ-GIAE/IITA Cassava & Maize Project; noted that the project developed an approach called the BASICS model.

His words: “The BASICS model links the cassava breeding programs with Early Generation Seed Companies who multiply breeder and foundation seeds and pass them on to cassava seed entrepreneurs to produce certified seeds for onward dissemination to farmers. Through this model, we are able to increase cassava productivity, create new jobs and enterprises, promote quality and disease-free seeds, increase the rate at which new varieties are multiplied, and create avenues for feedback from farmers.”

Farmers who attended the webinar learnt about some of the new and improved cassava varieties available and their unique qualities. There was a question and answer session, and a link for farmers to place orders for stems in advance was provided.

Dr. Atser, who moderated the event, announced that requestors would be linked to sources of certified, disease-free cassava stems of improved varieties nearest to them. He explained that IITA GoSeed in Ibadan, and Umudike Seeds in Abia state have facilitated the establishment of several Foundation and Commercial Seed Producers across Nigeria.