November 20, 2021 No Comments By Cassava Matters BASICS II, Cassava in the News, Our News, Press Releases

The project: Building an Economically Sustainable Integrated Cassava Seed System, phase 2 (BASICS-II) and the Nigeria country office of the Alliance for a Green Revolution in Africa (AGRA) have agreed to work closely in reenforcing and promoting sustainable cassava seed system models in Nigeria.

This was part of the resolutions reached when BASICS-II team paid a courtesy visit to the Nigeria country office of AGRA in Abuja on 18 August.

BASICS-II and AGRA see the relationship as a win-win as both parties work on a common crop—cassava.

During the visit in Abuja, the two teams discussed areas of cooperation in the cassava seed sector in Nigeria.

The Project Manager for BASICS-II, Prof. Lateef Sanni said the conversation with AGRA was fruitful, adding that the synergy with AGRA would create impact to the cassava seed sector in Nigeria and beyond.

Grown by 4.5 million farmers in Nigeria, cassava seed sector has remained largely informal—a situation that favours the spread of landraces but hinders the diffusion of improved varieties and keeps yield per hectare low. BASICS-II project is currently changing the narrative through the creation of a formal seed system beginning with Nigeria and Tanzania.

The Country Manager of AGRA, Dr Kehinde Makinde commended BASICS-II, adding that the cooperation between the two teams would create greater impact in the cassava value chain.

He added that AGRA would support advocacy efforts to discourage the Federal Government from disrupting the cassava seed market. Furthermore, AGRA and BASICS-II will work with the National Agricultural Seed Council (NASC) to make seed certification more accessible and affordable. This has been an activity that BASICS-II had made progress, but more local certifiers were still needed.

The Advocacy, Promotion and Outreach Lead, Dr. Godwin Atser said the conversation also bothered on leveraging funding from the government and International Finance Institutions (IFIs) for investment in the seed sector. “Another area of possible collaboration was joint advocacy to create a robust market for cassava seed system and to end the disruption of seed systems through the distribution of stems that are often diseased.”

Dr Alfred Dixon in his opening remarks noted that the visit ton AGRA was timely and a step in the right direction. He stressed the importance of seed quality, accessibility of improved varieties and capacity building for farmers on areas such as the use of the Six steps to Cassava Weed Management toolkit  and the use of digital tools such as the IITA Herbicide calculator and Seed Tracker to enhance yield. 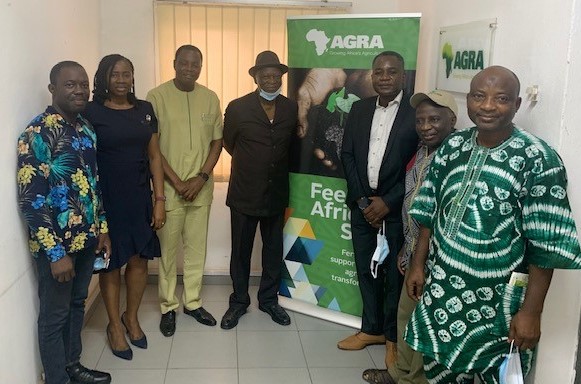